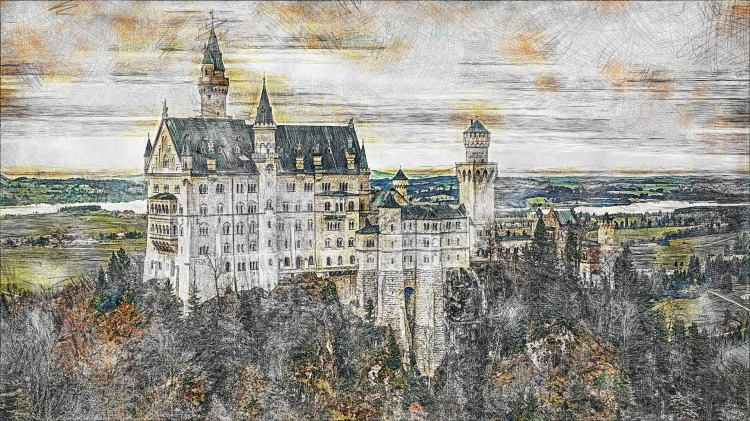 Once upon a time there lived a wise old king who loved his kingdom. He loved every leaf upon every tree and every drop of dew which glistened with the dawn. And his people loved him too, for he was a fair and kind ruler, who held his people reverently in his heart.

One night during a ferocious storm, a fire broke out in the woods which bordered his city. The king and all his people spent days trying to put the blaze out. Smoke blanketed the land and despite the back-breaking labour to contain it, many homes were lost.

When the fire was finally extinguished, the king returned home to his palace, his hands raw from helping to carry buckets of water and his lungs aching from the smoke. He dropped down onto his throne, exhaustion in every bone of his body.

Just as his eyes began to close, his oldest guard came rushing in to announce that a wise man had come to the kingdom and wished to meet with the king. Even though all he wished for at that moment was rest, he ordered a hearty meal for his visitor and greeted him with all the dignity of a ruler.

‘Thank you for the kindness of your hospitality, Your Majesty,’ said the wise man. ‘I confess that I’m here for a dual purpose. One was to meet the king that so many of your people speak so highly of. The other was to offer a gift.’

With those words, the wise man left the room only to return with a birdcage. Inside was a starling which began to sing so sweetly that the king felt the exhaustion fall away from his body. The simple song brought cheer to his heart, and for the first time since the fire broke out, he was able to smile and imagine better times to come.

‘This companion is my gift to you. Take care to listen, for he can guide you through even the roughest seas.’

The king thanked the wise man. Soon after, his guest took leave and vanished from the kingdom without a trace.

As the seasons turned, war came upon the land, with foreign soldiers marching across the province like a tsunami, swallowing everything in their wake. The king raised his own army to defend his people. He spent all his time determining strategies with his most trusted advisors, his back aching from the strain of being hunched over charts and maps all day and night.

And even in the darkest nights, when all seemed lost, the little starling sang his song. Every time the king heard the sweet melody, he took heart and made fresh plans to free his people from the invaders. When the leaves had turned to rust and the blue skies were blanketed with clouds, the foreign soldiers were finally in retreat.

As winter set in, the old king’s people were beset with a new kind of suffering. The fire which had decimated the forest meant there was little to no firewood to heat their homes, and the war had left them without a harvest to survive the winter. His people began to starve.

First, the king shut down the wings of his palace and gave almost his entire stockpile of wood to his people. Then he traded the gold in his treasury with neighbouring lands for food. When the gold was gone, he traded the tapestries which lined the castle walls, and the fine china upon which he had dined. He sold all his heirlooms and jewels and fabrics. Soon the palace lay cold and gray, stripped bare of all its luxuries.

The only comfort left to the old king was the starling. It continued to sing its song so sweetly, which made the old king feel warm even on the coldest nights in the frozen heart of winter.

The day after the longest night of the year, his ever-faithful guard, and dearest friend, rushed in to the king’s chamber. The guard did not announce himself as he once might have. He sat down beside the king and wrapped an arm around his frail shoulders.

‘Your Majesty,’ he began. ‘I come bearing awful tidings.’

The king felt the heaviness in those words.

‘Our people are afflicted with a strange new sickness. It begins with a fever, and ends in a disease of the lungs. Your people are dying by the hundreds and soon it will be by the thousands. It spreads faster than we can contain it,’ the old guard shuddered. ‘The only ones who grow wealthier are the coffin makers. Please, Sire, what shall we do?’

The old king sank under the embrace of his friend. But he kept his lip from trembling, lest his guard lose heart at the sight. They sat together in silence for a long time, darkness looming on the edges of the room. And then the starling began to sing. The melody was so familiar to the old king by now that he knew it by heart, even though it had no words.

He stood up, unrolling his shoulders and raising his chin with the stern look of a leader. ‘Gather our healers, apothecaries and medicine men for an urgent meeting. Order our people to quarantine inside their homes. Call forth my advisors. There is much work to be done.’

When the guard left, the old king noticed that the room felt suddenly colder, somehow emptier than it had a moment ago. His starling had stopped singing. He looked at the birdcage, which was now empty, although the door remained latched. Dropping to his knees, the old king wept. The loss consumed him. He covered his poor old face with his wrinkled hands, and let the tears fall.

‘Come, now, Your Majesty. It is not the loss which you think it is,’ came a familiar voice. The king looked up to see the wise man who had gifted him the bird.

‘Why?’ The king pleaded. ‘Why did you take away your gift? It was the only ray of hope left to me in such dark times.’

‘Your Majesty,’ exclaimed the wise man in surprise, his expression full of warmth. ‘I have taken nothing away from you. The bird is not gone, if you only know where to find it. Close your eyes,’ he instructed gently, ‘and listen.’

The old king did as the wise man said, and somewhere deep inside, he heard the starling sing that same sweet song.

‘Our friend, the starling, won’t ever disappear, for he lives within us. He won’t ever ask a thing of us. But he will give and give as long as we are open to receiving his gift.’

The old king opened his eyes and smiled. ‘For he is not a bird at all, is he?’ asked the king.

‘No, he is much more. He is hope. And as long as we can find hope and embrace it, we can overcome any crisis,’ replied the wise man.

The king rose from his knees, steady and strong, and placed a hand upon the wise man’s shoulder. ‘Come, my friend. We have another battle to fight.’

Authors note: I’ve always found poetry difficult to connect with. I don’t know why. I’ve read passages in novels that have brought me to tears and listened to lyrics (a form of poetry, I suppose) that send me soaring to the greatest heights. But I couldn’t ever feel the power of straight up poetry until recently. This story was inspired, influenced and driven by Emily Dickinson’s poem ‘Hope is the thing with feathers’. Please find the time to google it. Because right now, it will shine a light into even the darkest places. Stay safe, everyone. Sending you all my love, and, more importantly, all my hope. X

7 thoughts on “Fiction: The King and the Starling”