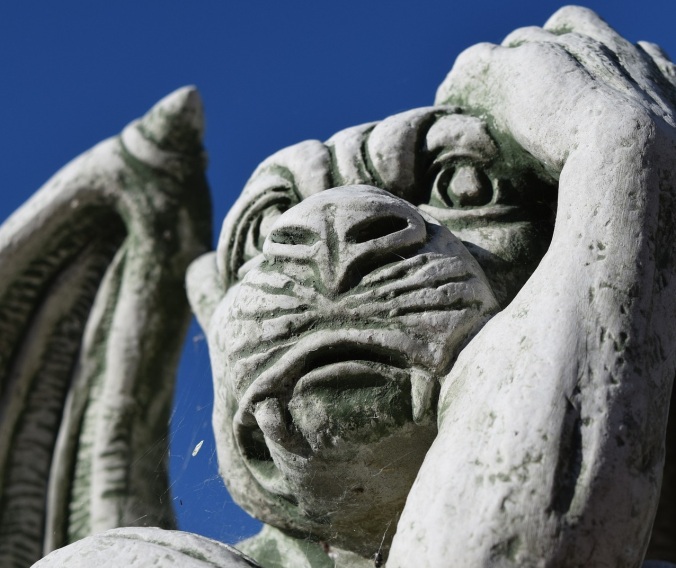 The rain had washed away the finer details of his grotesque form and the sun had bleached the stone into a ghostly white. Hideous bat wings sprung from his hunched back, while a set of fangs curled down over his chin. No-one ever bothered to clean him the way they did the other statues, so moss began to grow from the crevasses in his face.

There was no denying that he was ugly.

He knew that, but he was as the sculptor had shaped him.

From the roof, right near the tallest spire of the church, he looked out upon the bustling city below, gripping the eave with his talons.

Everyone marvelled at the splendid beauty of this church.

From the stained glass windows depicting the different saints in all their glory, to the white marble statues of angels reaching out to the sky, the city church was the pride and joy of an entire generation.

If only that ugly gargoyle hadn’t been there.

The city folk felt that he only tarnished the beautiful vision, and it was said that under the moonlight he would come to life and cause devilry throughout the city.

But, of course, he did no such thing.

If anyone had bothered to take a closer look at this horrible figure, they would have noticed how peaceful his eyes were as he gazed over the city he loved so much. And even more so, they would have seen the love that shone from his face when he looked upon the angel standing before him with her marble wings outstretched to the piercing blue skies.

Through rain and shine he would look upon her and wonder what she was thinking. He didn’t care what the people said about him because he knew what was in his heart; even if the people didn’t have the imagination to see passed his hideous form.

But so few people ever do.

When dark storms swept across the sky, he would comfort the angel and tell her stories of the sunlight that followed all storms. When the nights grew long he would describe the dawn to her, and when the city went to war he would talk of peace to ease her sorrows.

He loved his city, and his roof, and his angel.

Even though the world despised him.

And then one day during a violent spring storm, a bolt of lightning crashed against the church and shattered both the gargoyle and his angel.

He lay on his side, broken into three different pieces. His stony eyes could not produce tears, so he only watched, helpless as the angel lay where she fell, her wings broken and a chip marring her lovely cheek.

Days passed and no-one came to set her right.

He spoke to her softly, in a tender voice, and told her of how much happiness she had brought this lonely gargoyle. He sang her songs he had heard the city folk sing during festivals, and recited prayers that the monks repeated down in the church. With every ring of the church bell, he would implore her to take heart.

Week passed, and finally the workers came to repair the church.

They fixed its roof and brought the angel back to her feet. A famous sculptor was even commissioned to fix her wings and smooth her damaged face.

‘What about the beast?’ said one worker, gesturing to the broken gargoyle.

‘Just leave him,’ replied the sculptor. ‘It’s possibly the ugliest thing I have ever seen. This place is better off without it.’

The repairs went on for days, and then all the workers left as quickly as they had come.

All was almost as it had been.

Except the gargoyle, who still lay where he had fallen, broken into three pieces. But he didn’t mind so much because his angel was upright again, with her lovely wings in place and only the trace of a shadow on her cheek.

Only now she was set on a slightly different angle so that she smiled just for him.

And her pretty eyes were filled with love as she looked upon the hideous creature no-one else had wanted or bothered to fix. She remembered his stories and songs and tender words. She gazed at him as if he was the most beautiful thing she had ever seen.

For she truly loved him most of all.

6 thoughts on “Fiction: ‘The Gargoyle’”

© Ekaterina Tretiakova and Writing on Tangents, 2017. Unauthorized use and/or duplication of this material without express and written permission from this site’s author is strictly prohibited. Excerpts and links may be used, provided that full and clear credit is given to Ekaterina Tretiakova and Writing on Tangents with appropriate and specific direction to the original content.
%d bloggers like this: